The first workout was tough. 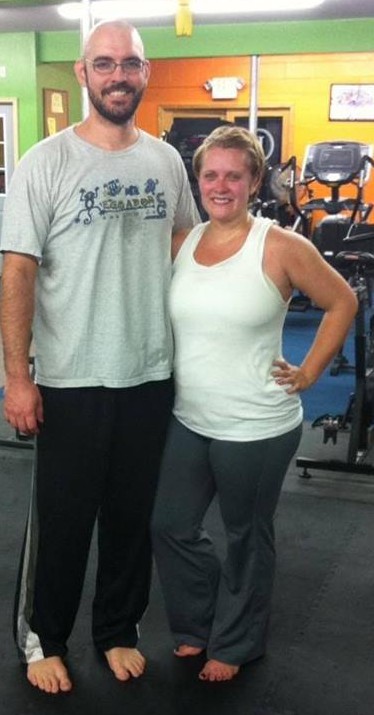 When I met Jason in the summer of 2013, I was looking for a way to revamp my fitness routine. I like variety, so lifting weights and running was getting a little stale. When I first saw his class, I could see how hard everyone was working—they were panting so hard, they could barely cheer their partners on through the last set of exercises. It seemed like this class could work for anyone—not everyone was young and super-fit, but it was clear everyone in the class was being challenged. It looked like a lot of fun, so I resolved to join in and see what it was like.
The first workout was tough. We progressed from foam rolling, crawling, and stretching, to more intense exercises like kettlebell swings, burpees, and barbell thrusters. When I got home after the workout, I had to skip putting on eyeliner because my arms were so tired and shaky. But Jason was so knowledgeable, patient, and encouraging, I knew I was going to go back. Even after having me in his class for the last 6 months, he always finds new ways to challenge me and help me improve my fitness. In the short time I’ve been working with Jason, I’ve seen tons of improvement in my strength. I started out swinging a 20-pound kettlebell, and now 80 pounds is no problem! A lot of the benefits I’ve gained from the class were totally unanticipated. Because the movements are natural and functional, I’ve found that I have much better posture now than I did before. I used to have a lot of neck pain, and at this point, it’s completely disappeared. I can also tell my metabolism is improving, and people have commented on how much more toned my arms and calves are. I also found that his class helped a lot with running; when I started, I couldn’t hop on one leg because the pain in my knee was so bad; within 2 months of working with Jason, my knees felt better than they have in years.
One of my favorite things about this class, though, is how I feel about myself. I’ve never been an athlete, so I often feel self-conscious in classes. I’m never the strongest, the fastest, or the most graceful, so I often feel as if I don’t belong. Jason does a great job of building a culture where the ultimate goal is to be a better version of yourself every day. I never felt uncomfortable or ashamed of what I could do in the class. The class is hard for everyone, so we’re always excited to see someone smoke their old record of 20 burpees in a minute…even if our own record is way higher. As someone who has always been reluctant to join workout groups, I can honestly say that with Jason and his class, I’m excited to get up in the morning and show that 80 pound kettlebell who’s boss.